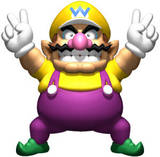 Wario made his first appearance in Super Mario Land 2: 6 golden coins as the main villain and final boss. Wario was created by Gunpei Yokoi based on Hiro Kiyotakes nieghbor. Kiyotake is an artist from Nintendo that designed Wario, Samus Aran, and many other popular characters. Wario has always been Mario’s rival since Super Mario Land 2: 6 golden coins. You can say that Wario is Mario’s opposite, starting with the M and W. Since Luigi is Mario’s brother and also happens to have a rival named Waluigi, many people think that Wario and Waluigi are brothers, but there is no solid proof. What makes Wario so cool is that he had his own video game franchise spanning both handheld and consoles. In most of his games, his greed for money or anything he wanted is the reason he puts himself in an adventure. Otherwise, he probably wont have many games and for some reason his favorite food is garlic. When he munches down on some garlic, he magically turns into Wario-man. Wario-man never really had any powers, but in Brawl Wario-man needed powers so he could at least have a final smash. He is mostly known by his Wario ware games, but is also popular by his Wario land games. Look out for his debut on Wii

im a boy
View all posts by 1warioman1 »