Homebrew once again prevails, although if you haven’t yet updated to 4.2, It still isn’t recommended. While Homebrew Channel can now be installed on 4.2, some apps like Preloader lose functionality, since the newest version of Homebrew Channel seems to have J0DI as a new title ID; 4.2 deletes the orginial HAXX Homebrew Channel ID on every Reboot, so a new title ID was for the best. You can find out more on the hackmii blog, including how to install Homebrew on the latest 4.2 update [the HackMii Installer v0.5]. However, there seems to be a new Hacks.ini for use with preloader on 4.2 consoles which disables [HAXX,DVDX,RZDx] checks, so updating Homebrew to a new ID is not really required, although the newest HBC has some cool new features like Device hot-plugging.

However, putting all homebrew aside, there has been some inside info that System Update 4.2 was poorly executed, and people seem to be getting random bricks on their Wii’s, even without having their Wii’s softmodded or hardmodded in any way.  Some victims of the 4.2 update brick have posted their issues and concerns on the Nintendo Official Troubleshoot forums, and many who have disclosed information on the reason why 4.2 bricks Wii’s at random have occurred get banned and their posts deleted. This of course all relates to “company image”, and people smart enough to pin-point Nintendo’s irresponsibility are obviously a threat to the “pro” that is Ninty. So what exactly makes 4.2 a creepy flaw? Read this here user post that was deleted from the Nintendo Troubleshoot forums, followed by a ban: 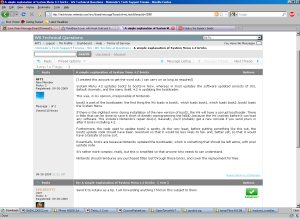 This outbreak is spreading throughout the net, and I feel that it is very important to get te word out as much as possible, seeming as Nintendo probably will only replace your console, leaving save files and VC/Wiiware titles at risk. Not to mention the lack of attention and dedication they put into their work. Like someone on the Hackmii site stated, 4.2 is basically a “Russian Roulette”…

“The information discussed above is based on details disclosed of by external sources. I only express my thoughts that this should be taken into consideration. I Have not confirmed or experienced a brick through 4.2., so I do not uphold that said info is true, but possible”

Dragon Quest Fan. Love Blogging and modding video games. I find Psychology and the universe very interesting. I like books, games, and learning new languages. I dream to travel the world and possibly settle in Japan.
View all posts by Jose Gallardo »